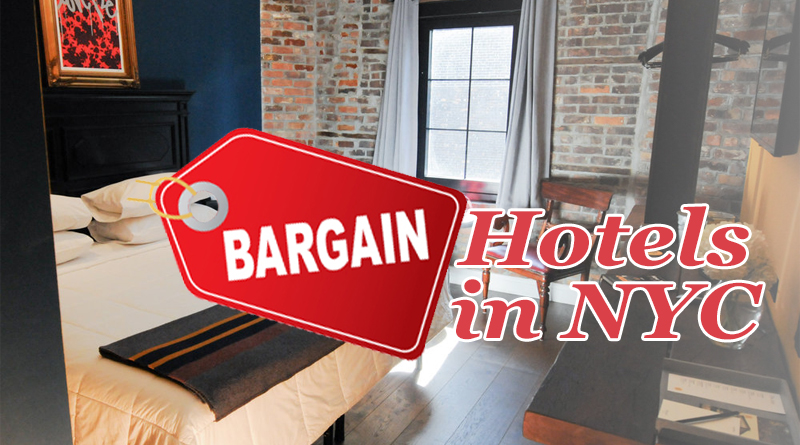 Why You Have Never Heard Of These Cheap and Discount Hotels

New York City does actually have some bargain hotels that are $100 or less per night without having to resort to camping out in Central Park or hoofing it to one of the “shared dormitory” hostels. Some of these NYC hotels are so far “off the grid” that the popular hotel and travel Web sites don’t even carry them. It’s not like they are all the worst hotels in New York City, it’s just that they are so low cost that they will not will pay a commission back to the travel Web sites, so they don’t get listed. Some of them are so hard up that they won’t even pay a travel agent their commission if they place a client there – so you get a bunch of hotels that do not get listed on sites like Expedia.com, Hotels.com, and Orbitz.com, and travel agents are reluctant to place clients there because there is no commission kickback.

Where Are These Bargain Hotels?

Many of these hotels are centrally located in Midtown Manhattan, some near Times Square and all offer a budget hotel solution for the economical traveler.

This bargain hotel is not actually in Herald Square at all (Its 3 blocks South) and was popular in the 80’s for renting rooms by the hour. The Herald Square Hotel has since improved from its prostitute clientele as the city has changed around it. This discount Hotel now offers Queen Rooms for less than $100 a night and nicely decorated queen rooms with flat screens and hardwood floors for around $130. All rooms get free WiFi and the prices go up and down depending on the season – but it’s often a bargain compared to the bigger and more expensive hotels. The rooms are very small, but clean and even some single rooms with a shared bathroom are available at rock bottom prices.

“Tiny box rooms but friendly staff” is how many people have described this discount hotel. Most of the rooms at The Portland Square Hotel are clean and the hotel centrally located in Midtown Manhattan making it one of the slightly-better New York bargain hotels. Times Square is only 50ft from the front door, so this hotel is long on location and short on frills. Like most bargain priced hotels, the lobby is pretty and welcoming, even though it is small. Free Wi-Fi is available throughout the Portland Square hotel. The 150 guest rooms are painted in various shades of brown. Some of the guest beds have good mattresses and duvets. Good quality pillows can also be found here. Although the guest room decor can be mediocre, the comfortable beds may make up for it.

The winner of Tripadvisor.com “Dirtiest Hotel in America 2009 Award” and featured on New York’s FOX 5 TV, this New York hotel offers a great location next to Times Square but an experience only for the brave of heart. What it lacks in cleanliness it more than makes up for in location and price. It’s been noted that you should check your room out first before you take your bags up as some of the rooms are in bad shape and it’s nice to be able to back out before you get charged. They also have a spooky abandoned penthouse on the roof. Queen Rooms run about $100 per night, prices change during the season. To gain the accolade of “Dirtiest Hotel in America 2009 Award” the staff at this hotel had proven their dedication to their art of dirt. This hotel doesn’t feel like a bargain until you remember that you only paid $100 a night and any bed bugs that you find are free.

The New York Inn is a discount hotel located at the heart of midtown Manhattan at 47th street and 8th Avenue, a short walking distance from Times Square and the Broadway Theaters. In one of the very few seedy areas that are left in New York City, The New York Inn is also convenient to the Port Authority bus terminal and sex shops that have been allowed to continue operations. Many of the rooms were renovated in 2018. The New York Inn is suitable for budget minded travelers and tourists who are looking to keep costs down and spend a lot of time in the city and not in the room. As always check your room before having the credit card charged and have a backup hotel in case this one loses the reservation, runs out of rooms or cannot provide you with a reasonably clean one.

Located in the heart of Downtown Manhattan, the SoHotel is steps away from the most cultural points New York City has to offer off the bowery street at 341 Broome Street a few steps from Little Italy and china town. The Bowery has gone through some dramatic changes over the years- and now it’s the “hot” place to be in NYC. The SoHotel has been through many name changes and is the oldest hotel in NYC is located in Lower Manhattan Built just north of the spot where the British once had a barrier gate and where George Washington entered the bowery with his troops and took command of the city back 1783. It’s very basic, has no phones in the guest rooms, so it’s great as base to sleep, but the thin walls and street noise don’t add to its charm. As far as bargain hotels go, SoHotel being the oldest hotel in NYC makes it an interesting find.

You could say that this discount hotel is stuck in the 1950’s but with customer service direct from the 1970’s. The Skyline hotel is located in the ‘wilderness’ out on the west side of town and looks a bit like a roadside motel, but offers cheap and clean rooms without the hubbub of Times Square. Amazingly this hotel also has a pool, which is rarity in New York City and was recently ranked 225 of 444 New York City hotels. You will need to get a Taxi, bus or hoof back into town, which is about a mile walk. The service at this hotel is what you would expect for this kind of price, so it’s a good bet and few clients report problems. The vibrating beds and roaches were removed years ago, so no need to worry. As for amenities, you’ll have to shell out extra for renting a mini-fridge—even in the deluxe rooms and parking is at a premium, this is after all Manhattan, so don’t bring your car here.

What sounds like a five star hotel from its name is in fact a budget motel straight from the eighties, except no cars allowed.. When people commented that the staff were tolerable, that doesn’t bode too well. The Park Savoy Hotel is located near the bus lines and subway stops so its easy to get to every location in New York City. It is also very close to central park and felt safe to be at. Each room also gets a small refrigerator. The rooms are small but clean and don’t smell too bad. Many of the other hotels around Central Park South offer much better accommodations at ten times the price .Guests on a budget can expect a clean room, a comfortable bed, and very basic amenities that put them near Fifth Avenue shopping and Times Square’s theater district. This hotel was originally built in 1942 as a residential complex and later converted into a nine-floor, 80-room hotel. The hotel has not-so-pretty floral bedspreads and green carpet but do throw in some cable TV and central AC.

January 16, 2019 multisiteeditor Comments Off on Bus Tours in New York City
things to do

January 30, 2019 multisiteeditor Comments Off on Discount Tickets For New York Sports Teams
things to do

January 25, 2019 multisiteeditor Comments Off on Free Things To Do in NYC
NYCVB

March 5, 2021 multisiteadmin Comments Off on NYC and Company Lawsuit Made Against NYCVB at WIPO
things to do

January 24, 2019 multisiteeditor Comments Off on Guide to the Top Tourist Restaurants in New York City
things to do

January 29, 2019 multisiteeditor Comments Off on Things To Do For Seniors in New York City
things to do

January 18, 2019 multisiteeditor Comments Off on Discount Hotels in the USA and International