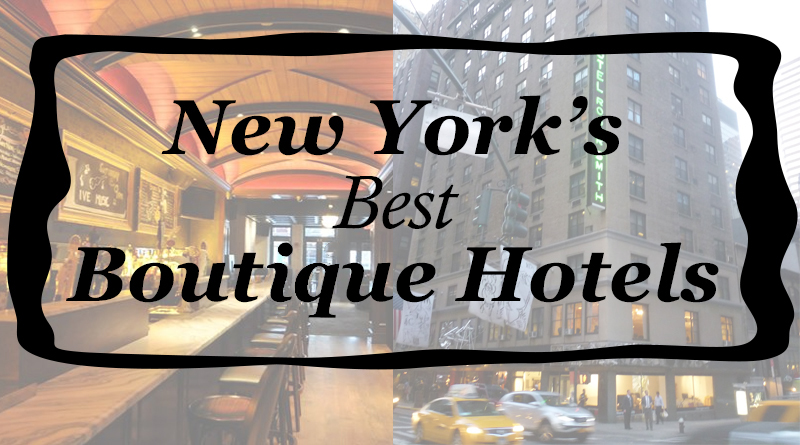 For a unique New York City hotel experience, consider staying at an affordable, charming boutique hotel before settling on a well-known brand of chain hotels. New York City boutique hotels often offer more personalized touch when it comes to services and accommodations. These New York City hotels seek to differentiate themselves from other boutique hotels by often outfitting guestrooms with the best state-of-the-art technology and wireless Internet access, offering movie and book libraries, or having uniquely decorated or themed restaurants onsite, for example. Boutique hotels can either be independent entities much like a bed and breakfast, or there can be several boutique hotels within a collection, such as Stay Hotel and its simply named sister hotels, The Time, Kimberly, Dream, and Night, all of which are Epoque Hotels. Boutique hotels can sometimes have concepts, theme-decorated guestrooms, or lobbies decorated in a stylish manner by big name designers; anything to create an interesting experience to set them apart and as an incentive for visitors to stay. A boutique hotel is also generally smaller than other hotels. However, they do come with the same amenities as mainstream hotels, like 24-hour hotel staff, concierge services, cable TV, Internet access, dining options, and bars and lounges. We have selected a variety of five boutique hotels in different New York City neighborhoods, including the Financial District, Midtown, Central Park, Times Square, and Midtown East.

Hotel Reserve is located in the Financial District in New York City’s lower Manhattan, near the Federal Reserve Bank of New York, Wall Street, and Ground Zero. This boutique hotel has 20 stories and 113 guestrooms, with rooms that have one king sized bed, two double beds, one double bed, are wheelchair accessible, and there are two rooms with a king sized bed and connecting terrace. Guestrooms have 32-inch flat screen TVs and granite countertops in the bathrooms. The hotel also features fitness and business centers, a fine dining cafe, laundry and dry cleaning services, and wireless Internet access.

On The Ave Hotel

On The Ave Hotel is a luxury boutique hotel located about two blocks from Central Park and the Museum of Natural History on the Upper West Side at 77th Street and Broadway. The hotel features meeting rooms, a business center, a fitness center, dry cleaning and concierge services, and Internet access. Onsite restaurants include Fatty Crab Restaurant and Bar serving Malaysian cuisine, and the West Branch Restaurant and Bar serves New American cuisine. A 16th floor balcony and landscaped patio is accessible to guests. Guestrooms include LCD flat screen TVs and Italian black marbles bathrooms.

The Hotel Mela is a boutique hotel one block from Times Square and several blocks from Bryant Park at 44th and Broadway in New York City. Onsite restaurant Saju offers a French/Asian fusion menu. Available function spaces are a boardroom seating 12 and two penthouse suites that each accommodate as many as 25 for private events and meetings. The 230 guestrooms have earth-tone decor and artwork of New York City, as well as LCD flat-screen TVs, complimentary wireless Internet, Egyptian cotton linens and 330 thread count duvets. An added in-room treat is candy from Dylan’s Candy Bar.

July 23, 2018 multisiteeditor Comments Off on Conference Facilities
things to do

January 29, 2019 multisiteeditor Comments Off on Walking Tours in NYC
entertainment

February 2, 2018 multisiteeditor Comments Off on Iconic NYC Comedy Clubs
things to do

January 28, 2019 multisiteeditor Comments Off on New Years Eve in Times Square NYC – Hotels and Restaurants
things to do travel

February 2, 2018 multisiteeditor Comments Off on NYC Brunch Spots – Bottomless Brunch Where You Can Keep Your Pants On
entertainment

January 30, 2019 multisiteeditor Comments Off on Things To Do In New York City
food and dining