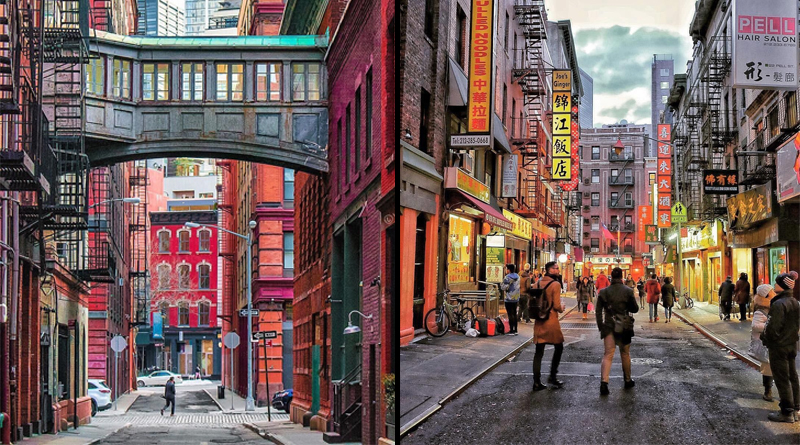 Tribeca and Chinatown are located in lower downtown Manhattan in New York City, two neighborhoods side by side above the Financial District.

Tribecca is an abbreviation for “Triangle Below Canal (Street),” and is known for its quiet streets, galleries, excellent schools, and expensive loft apartments that were once industrial warehouses, now populated by families and celebrities. Near many lower downtown hotels in New York City is Washington Market Park in Tribeca, a 1.61-acre park with large playground, community garden, tennis and basketball courts. Two of the best elementary and high schools in New York City are in Tribeca: Public School 234 and Stuyvesant High School. Try well known restaurants near Tribeca hotels like Nobu and Tribeca Grill, both co-owned by actor Robert DeNiro, or check out a concert at The Knitting Factory. Tribeca is also famously home to The Tribeca Film Festival, created by Robert DeNiro to help revive lower downtown New York City after September 11th.

Population is of primarily Chinese immigrants and the New York City neighborhood is residential and commercial, known for its open air food markets, produce and seafood stands, jewelry and souvenir shops, and for its fake handbags and other goods sold on Canal Street. The apartments in Chinatown are old tenement buildings. Although Chinatown and Tribeca are close in proximity, they are unique neighborhoods with much to offer.

Check out Chinatown attractions as well during your stay at lower downtown hotels in New York City. There is an Explore Chinatown information kiosk on Canal Street at Walker and Baxter Streets that is open daily, steps away from Chinatown hotels. Chinatown is home to Columbus Park, Chatham Square, the Museum of Chinese in America, an important archive of Chinese history, and the Mahayana Buddhist Temple, with golden lions guarding its entrance. The Edward Mooney House is also in Chinatown, the oldest townhouse in Manhattan, built in 1785.

Hotels in Tribeca and Chinatown

The Roxy is a lower downtown hotel in Tribeca, New York City. The hotel bar Church Lounge serves cocktails and hors d’oeuvres. There is a 740-square-foot rooftop terrace, a 24-hour business center, a screening room for 100 seated, and other function spaces. The 203 guestrooms feature Bose Wave music systems, DVD libraries, wireless Internet access, and even a free pet goldfish upon request.

The New World Hotel is a lower downtown hotel located in the heart of Chinatown, one block from the shops and restaurants on famous Canal Street. The hotel offers complimentary newspapers and wireless Internet access throughout the property. Guestrooms are of various sizes and have private or public showers, cable and satellite TV, and complimentary toiletries. Pets are not allowed.

Best Western Bowery Hanbee Hotel is a Chinatown hotel in the heart of lower downtown New York City. Complimentary continental breakfasts are offered, and business and fitness centers are on site. Throughout the eight floors are 102 guestrooms, five suites, and seven rooms for the physically challenged. Rooms have complimentary in-room HBO movies, cable and satellite television, and microwaves are available by request.

The Windsor Hotel is a lower downtown hotel in the Chinatown neighborhood of New York City. The guestrooms and public areas have contemporary decor, and the hotel is a modern brick building with six floors across the street from Forsythe Park and Chinatown. Standard, double deluxe, and luxury deluxe guestrooms feature cable TV, a miniature refrigerator, and other standard amenities.

January 17, 2019 multisiteeditor Comments Off on Hotels in Downtown New York City
things to do travel

January 17, 2019 multisiteeditor Comments Off on Hotels Near Central Park, NYC
plan your visit

February 14, 2020 multisiteeditor Comments Off on NYC Restaurant Week: How To Find Great Deals
things to do

March 28, 2019 multisiteeditor Comments Off on The Vessel Lands at Hudson Yards
entertainment

February 6, 2019 multisiteeditor Comments Off on Top Concert Venues in New York City
things to do

January 28, 2019 multisiteeditor Comments Off on Things To Do In New York City For Kids
things to do