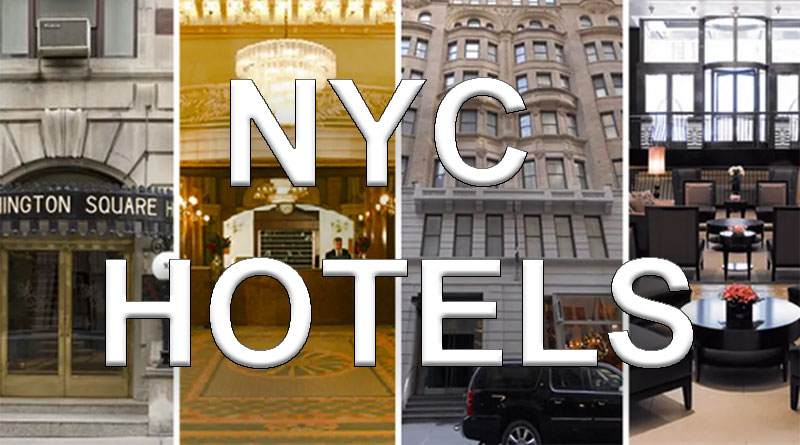 While there are over 1600 hotels and 150,000 rooms in New York City available for booking at any one time. The choice of the area to stay can have a big affect on your overall experience as many areas of the city may not be a good match for what you intend to do in the best and brightest city in the world.

Hotel room reservations for all the NYC hotels are available at the following providers:

Everyone has different expectations for their own New York experience and a good hotel at the right price can help realize that dream. In New York City, some people want to just do the tourist thing in Times Square and maybe go and see some Broadway shows on the Great White Way. Other people just want to reenact the final scene in Sleepless in Seattle, at the top of the Empire State Building at closing time and others want to be covered in birds in Central Park, just like in Home Alone. The great thing about NYC is that you can do it all, from shopping with the stars on Fifth Avenue to wandering through the groves in Central Park.  If your idea of the perfect NYC day is to grab a warm pretzel and hail a yellow taxi, then you will need a hotel to stay at because NYC should never be experienced for just one day. In the city that never sleeps, there are many people working away behind the scenes to make your stay perfect, despite the weather and the traffic.

Things to See in NYC

There are so many things to see in NYC so your short trip can feel like a bit of a whirlwind if you choose to cram too much into a too smaller time frame. There are a few categories of experiences in NYC that include, food, drinks, tourist attractions, art, theater and shopping. Some of the few key sights and experiences that you should put on the agenda for the quintessential NYC experience are seeing a top Broadway show, visiting the famous art galleries around town, taking a look at some of the amazing museums NYC has to offer on Museum Mile, having an all-you-can-eat Bloody Mary brunch at one of the many hotels in the city, taking a trip up to the top of the Empire State Building, walking through Times Square at night, lazing on a Sunday afternoon on the South Lawn in Central Park and listening to one of the great bands that appear there, having afternoon tea at La Pierre Hotel, put your toes in the sand at the man-made beach under the Brooklyn Bridge and walking the High Line from end to end. Now that Central Park no longer allows any traffic, it’s wonderful to run, skate or bike it at any time of the day and Grand Central Station offers a wonderful gallery and food court that cannot be missed. Those who are politically inclined can also visit the golden steps of Trump Tower on Fifth Avenue or even better yet, visit Donald Trump’s first construction project in NYC at The Grand Hyatt Hotel at Grand Central Station, where he shrewdly wrapped a huge ugly brick hotel (The Commodore Hotel) with glass and called it finished.

New York hotels have a deserved reputation for being overly expensive, often tiny and terrible food and service but there’s a large amount of choice and great bargains and good experiences do exists if you are prepared to stay off the beaten track. there are now many kinds of hotels for every kind of traveler. There are still the older low end hotels that come in at under $100 a night and offer sparse rooms and poor experiences that resemble a motel room from the 1970’s, but for the same amount of money you can now stay in a European pod hotel that is tight on space, but is fully featured and more popular with young travelers due to its modern conveniences and fresh approach. It is no longer acceptable to go home with bed bugs from a NYC hotel stay. In the medium range of hotels there are some great hotels with amenities that pamper

Which Area to Stay in NYC

For the first time visitor, its often best to stay in the Times Square district for your first experience of NYC. If you stay further out you will constantly be traveling back to Times Square and Midtown West, so it will be wasted time travelling, unless you really like taking cabs or using the subway train of course.

Times Square has a lot of attractions nearby and many hotels are located in this area, with the focus being on budget hotels with very few amenities – don’t expect a rooftop pool. This location is the heart of New York’s entertainment district, so you can easily walk to many of the major NYC attractions. Native New Yorker’s never go to Times Square as it is overridden with tourists and the food and entertainment has been geared to them, both in quality and price. The only time locals they will go there is for a Broadway Show and even then they do their best to avoid the tourist mayhem in Times Square itself. To have a more local experience, there are many other neighborhoods in NYC stay at, but staying in this area is almost a rite of passage.

The Upper East side is a residential bedroom community with little to offer the traveler, but the Midtown-Eastside district is laid back, with some nice cafes and vintage shops around. This area has more mid-range hotels and often caters to United Nations diplomats, so the food and bars are often very good. The Lower East side and all its adjacent neighborhoods are now the most trendy part of New York City and the area sees a deluge of activity on the weekends with every kind of hipster looking for the next greatest bar and restaurant in the area. Underground clubs pop up all the time here and its always a happening spot, so getting a hotel here will make sure you don’t have to walk too far to get home at 5 am. For party animals, this is the center of the world.

The Upper West doesn’t have a lot of attraction for a visitor, but Midtown West has a lot of interesting stores, museums, art and theater. The Lower Westside offers little for the traveler other than discounted hotels rooms, which is ultimately no bargain given the amount of taxis you will be paying for, but they do have some great Restaurants in Chelsea and Greenwich Village.

Only stay this far downtown here if you are working on Wall Street or have some other business in the area, as the hotel prices may be lower than other neighborhoods and the quality of the hotels will be much higher, but it is quite far from anything. Believe me, you will only spend one day down here doing the Statue of Liberty, 9/11 Memorial, WTC and South Street Seaport and you will then spend the rest of your time travelling to more interesting areas on NYC and wondering why you are down there. Nights and weekends in those areas are dead.

Over the bridge in Brooklyn and through the tunnel to NJ, you’ll find the very best bargains on hotels, but given the distance from the NYC action, it will have a negative affect on your NYC experience and it could be one that you live to regret. Seeing factory’s or docks from your hotel room window is not the experience that you probably intended.

Airbnb is not yet a viable lodging option in NYC as the local government actively attempts to keep the company from establishing a foothold in NYC, due to fears that it could bring down the city’s hotel industry and affect the rent stabilization program.

January 28, 2019 multisiteeditor Comments Off on New Years Eve in Times Square NYC – Hotels and Restaurants
things to do

June 22, 2018 multisiteeditor Comments Off on Guide to Street Parking in New York City
things to do

July 27, 2018 multisiteeditor Comments Off on Top 3 Conventions in NYC
conferences

January 17, 2019 multisiteeditor Comments Off on Upper West Side and Lincoln Center Hotels in NYC
things to do

January 18, 2019 multisiteeditor Comments Off on Things To Do In New York City – For Under $10
plan your visit

July 23, 2018 multisiteeditor Comments Off on Plan Your Visit
entertainment

January 29, 2019 multisiteeditor Comments Off on Helicopter Tours in NYC
plan your visit