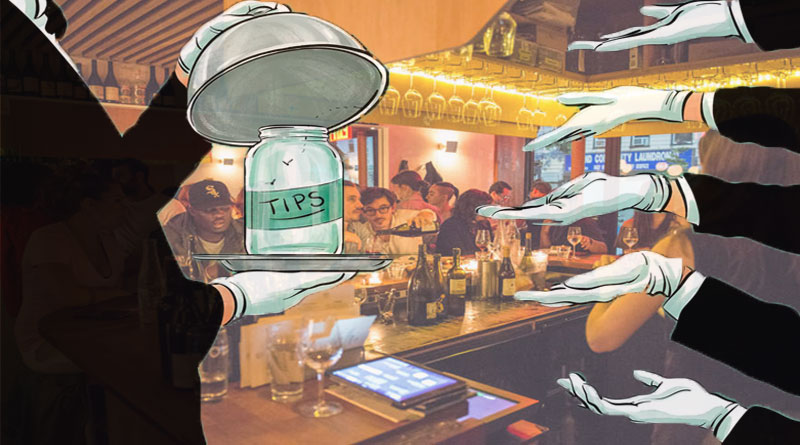 How much do you tip at hotels, restaurants, bars, clubs, transportation and food delivery in NYC? One of the biggest hidden costs of visiting or living in NYC is tipping. Quite often the tip is the only source of income for service people, so it’s important to get it right. It is essential to know when tipping is expected and how much to properly tip. Not tipping where it is due can result in poor service or embarrassment, so tipping the right amount to the right people can go a long way to making life easier for everyone.
Visitors to NYC are often confused about tipping, how much tip to give and when. British visitors are notorious among service staff for poor tipping, or not tipping at all when visiting America. This is because tipping has never been part of the culture in the UK. This has resulted in service people often refusing to wait on British customers or only serving them if the service charge is automatically added to the bill, so there will be no confusion about the tip at the end of the meal.

Wait staff at restaurants expect 15% to 20% gratuity on the total bill. When eating out during Restaurant Week in New York City, tip generously because you may have gotten a large discount on food, but wait staff still need to earn a living. Also tip well if you are with a large group of people. Many people work for tips alone in the service industry. NOTE: Accidental double tipping is common, so you should avoid tipping on top of bills that were totaled up with the service charge already added. Double tipping can mean that you accidentally leave a tip of over 40%, something the server will rarely tell you about. Also, parties of five or more often have this service charge automatically added to the bill, so there is no need to tip.

Many coffee shops and sandwich shops now have a tip jar at the register. It is not normally appropriate to give a tip for these services unless the barista at Starbucks really went out of their way for you. If this trend continues then all people in every spectrum of the service industry will have their hand out for a tip after performing any service. By the way, please be sure to leave a couple of dollars at the end of this article because I had to type it and my fingers hurt from all this manual labor

At bars, always tip the bartender at least $1 for the first drink, and if you are feeling generous, continue to tip $1 for each drink purchased. Failure to tip will result in the inability to order another drink and sometimes dirty glasses. Dance clubs and some bars will often have a bathroom assistant there to hand out paper towels to dry your hands. Tip bathroom assistants $1 at some point during the night, as you will most likely be stopping in a few times.

Many restaurants, bars, clubs, museums, and other establishments have coat checks available to check belongings. Upon returning to pick up your belongings, drop $1 into the tip jar or bowl they have placed out to show appreciation.

Tipping a taxi or limo driver in New York City is customary. Tip the driver 10% to 20% of the total fare, depending on how large of a bill it is and how good the service was. Consider how quickly and safely the driver got to your destination. Go with your instincts; if the driver seems to have taken advantage of the fact you are from out of town, then there is nothing wrong with giving a small tip or nothing at all. If you choose to not give a tip to a cab driver, be prepared to defend your choice and you may also receive a tirade of insults as New York cabbies are not know for being shrinking violets.

Having food delivered is an incredibly popular and convenient way to eat in New York City. Endless amounts of restaurants have food delivery service. For small, cheap packages, tipping $2 should suffice; but for a larger bag with several items of food, tipping $4 or $5 should cover it. If the delivery person had to weather rain or snow to get to you, be extra generous.

Tipping For Other Services

Although there are few gas stations in New York City, it is not customary to tip at the pump unless the gas was pumped for you and the windshield was cleaned. Two dollars is usually appropriate for this service.

Price tags on clothes and other items don’t display sales tax, which can sometimes push a seemingly cheap item into expensive territory. New York City sales tax is 8.375%. Sales tax is not payable on items such as food at grocery stores, clothing, footwear, or prescription drugs. For clothing and footwear purchases exceeding $110, a New York state tax of 4.375% is charged.

February 7, 2019 multisiteeditor Comments Off on Guide to Getting Around New York City
travel

June 29, 2018 multisiteeditor Comments Off on Parking Lot and Garage Tips and Scams to Avoid in New York City
things to do travel

January 17, 2019 multisiteeditor Comments Off on Hotels Near Central Park, NYC
food and dining

January 24, 2019 multisiteeditor Comments Off on Hotels on the NYC Thanksgiving Day Parade Route
plan your visit

February 5, 2019 multisiteeditor Comments Off on Free Internet and WiFi Access in NYC
conferences

July 27, 2018 multisiteeditor Comments Off on Other Convention Facilities in NYC
plan your visit

January 17, 2019 multisiteeditor Comments Off on Upper West Side and Lincoln Center Hotels in NYC