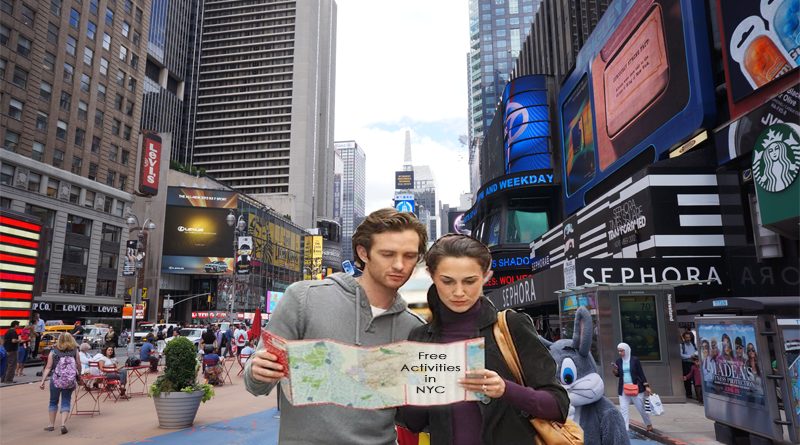 Our list of cost-free activities will point you to some of the most beautiful, most fun, and most iconic places to visit in all of New York City. Some of these attractions are best enjoyed in good weather, and many of the free entertainment options are only available during the warmer months, so we would recommend that people on a tight budget try to visit NYC during the summer, spring, and even in the winter. New York has lots to offer people who don’t have much money to spend. You can visit the city’s many museums on their free days, admire the impressive architecture of local landmarks, and even sit in on a taping of one of your favorite TV talk shows. Any time of year, the sights, sounds, and energy that makes NYC special can be enjoyed for free by everyone – just walk down the street and soak it all in.

The Free Activities Around NYC:

Catch the breeze even in August on the Battery Park Esplanade, complete with spectacular views of New York Harbor and the Statue of Liberty.

Take a trip up to the Marriott Marquis Hotel, go to the 7th floor, and marvel at the size of the huge atrium that you would have never guessed existed from looking from outside. Test your courage by standing next to the glass elevator wall on the 8th floor and watch a torpedo elevator descend from above at high speed – you would swear it’s going to land right on you.

The Staten Island ferry itself is quite mundane, but the views of the Statue Of Liberty and the Manhattan Skyline are memorable – and it’s completely free.

Over 200 free concerts, dance, and theatrical performances (as well as some educational and sporting events) are offered at parks all over New York City thanks to the City Parks Foundation. These events have a wonderful community vibe to them, and they offer a great excuse to explore NYC’s many beautiful public spaces.

Shakespeare in the Park In Central Park

Each summer The Public Theater puts on a couple of top-notch, star-studded (Meryl Streep, anyone?) productions at the Delacorte Theater in Central Park for absolutely free. Tickets are handed out at the Delacorte at 1pm on the day of the show, but people start lining up bright and early in the morning.

Lots of your favorite television shows – including David Letterman, Maury Povich, and The View – tape right here in NYC.

Landmarks to Visit in New York For Free.

1000 Surf Avenue, at the southern end of Brooklyn

Hot dogs, circus sideshows, and the beach all meet at this legendary Brooklyn landmark. When you stroll the three-mile boardwalk at Coney Island, you’ll feel like you’ve stepped into another era.

Drop by the Information Booth to get a pamphlet, then take a self-guided walking tour of this magnificent (and busy) station, which is one of New York City’s grandest architectural wonders.

Explore thought-provoking exhibitions at the breathtaking library which is located on Fifth Avenue just by Bryant park. The library is a Beux Arts landmark which reflects one of the great artistic collaborations of the era.

Discover an Art Deco masterpiece on a self-guided tour of majestic Rockefeller Center (free, pick up maps in the main lobby of 30 Rockefeller Plaza, where you can also enjoy the summer gardens or ice skating in winter in the shadow of Manhattan’s most magnificent skyscrapers (skate rentals available for a fee, 212-332-7654).

John Lennon’s only physical legacy costs nothing to visit and provides you with a sentimental journey down memory lane. Your visit can be enhanced by John Lennon “Soundalikes” and is especially memorable around his birthday (October 9th) and the anniversary of his death (December 8th) by the many tributes that are left there. Although Yoko Ono still lives across the street in the Dakota Apartments, she is rarely seen in Strawberry Fields.

This museum which id located on the Upper West Side of New York City is home to many folk art collections. It is one of the first museums dedicated to folk art and the contemporary work of self taught artists.

On Fridays Between 7-9.30pm the Museum has a “Pay What You Wish” evening. The museum focuses on 20th and 21st century art and was founded by Gertrude Vanderbilt Whitney. The museum is named after him.

June 22, 2018 multisiteeditor Comments Off on Guide to Street Parking in New York City
things to do