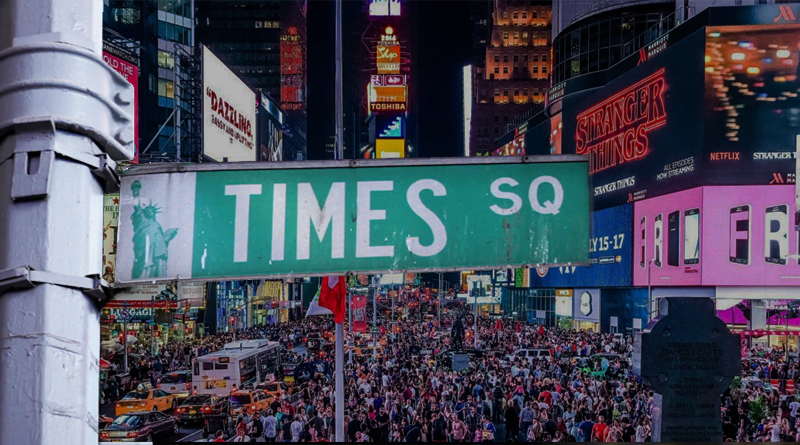 Our collection of Times Square hotels in New York City are either located directly in Times Square or are at the very most just one block away. These hotels are all convenient to all the sights and sounds of Times Square. Quite often, hoteliers in New York City will not accurately describe the exact location of the hotels, so you can end up in a location that you didn’t expect. If you want to be slap bang in the middle of Times Square, you have come to the right place.  Times Square Hotels in NYCThis set of New York hotels is not for the faint of heart as Times Square is always bustling and can be loud and boisterous, even at night. These Times Square hotels are perfect for the first time visitor who wants to be in the thick of the action, no cab or subway ride will be necessary to get to any of the local attractions including the Broadway Theatres, tourist restaurants, bars and other sights as they are all within one block of these hotels. Many businesses in Times Square operate 24 hours a day, so a sizzling steak at 5AM is no problem.

Times Square (Or Duffy Square as it’s often referred to) is not really a square, but a road junction where Broadway Intersects 7th Avenue, that has created a mecca for tourists. In the center of Times Square there is one of New York’s famous landmarks, the TKTS ticket booth with its famous red steps. Times Square is located in the Theatre District Of New York, NY other local attractions are Radio City Music Hall and Rockefeller Center which are within three blocks. Grand Central Station Is One Mile East. One-half Block from The Toys “R” Flagship Store, The MTV Studios, Planet Hollywood, Madame Tussaud’s And The Hard Rock Cafe.

Radio City Music Hall, Rockefeller Center And Fifth Avenue Shopping Are Within Three Blocks. NYC Locals often avoid walking through Times Square because it can take much longer to get through it as it is always packed with people jamming the sidewalks, ticket scalpers selling their product, MTV doing street interviews, sightseeing tour bus operators, fake handbag and sunglass sellers, street performers, religious groups with bullhorns, off-Broadway show people selling tickets and many other tourist associated businesses. It’s a cacophony of chaos. If that’s the kind of excitement you want, Times Square, in the heart of New York City, is definitely for you.

Paramount Hotel is located one half block from Times Square and was designed by Philippe Starck. The hotel features Dean & Deluca, Mezzanine Restaurant, Library Bar, Paramount Bar, a 24-hour fitness room, and wireless Internet access throughout the hotel. Pets are allowed. All full, queen, or king-sized beds in the 597 guest rooms have gilt-framed headboards with images from famous Vermeer paintings.

Best Western President Hotel is located a half block away from Times Square and Broadway. The hotel features Vietnamese and Japanese restaurants, onsite gift shop, cocktail bar and lounge, business center, and free newspapers. There are more than three hundred guest rooms and suites, each with complimentary wireless Internet access and free long distance access.

Crowne Plaza Hotel is New York City’s only hotel with a front door actually on Broadway in Times Square. Onsite restaurant Brasserie 1605 serves seafood, steak, and an extensive wine list, and Broadway 49 is a full bar serving 89 varieties of cocktails. There is a 29,000-square-foot health club and rooftop indoor heated pool with glass ceiling. Each of the 770 guestrooms has a 37-inch flat screen television and wireless Internet access.

New York Marriott Marquis Times Square is less than three blocks from 30 theaters. The View Restaurant & Lounge is New York City’s only revolving rooftop restaurant and Encore Restaurant is theater-themed. A 24-hour business center features high-speed Internet access and there is more than 100,000 square feet of event space. The 1,949 guestrooms and suites are soundproofed.

The W New York Times Square is tucked around the corner off of Broadway. The hotel features seafood restaurant The Blue Fin, which hosts live jazz performances. The Living Room Bar is on the lobby level, and below the hotel is the 7,500-square-foot Whiskey Nightclub. There is 2,300 square feet of meeting space. Guestrooms include flat-screen TVs with DVD players, in-room safes, coffeemakers and minibars.

February 2, 2018 multisiteeditor Comments Off on Popular Live Music Venues in NYC
things to do

January 24, 2019 multisiteeditor Comments Off on Guide to the Top Tourist Restaurants in New York City
plan your visit

June 22, 2018 multisiteeditor Comments Off on Guide to Street Parking in New York City