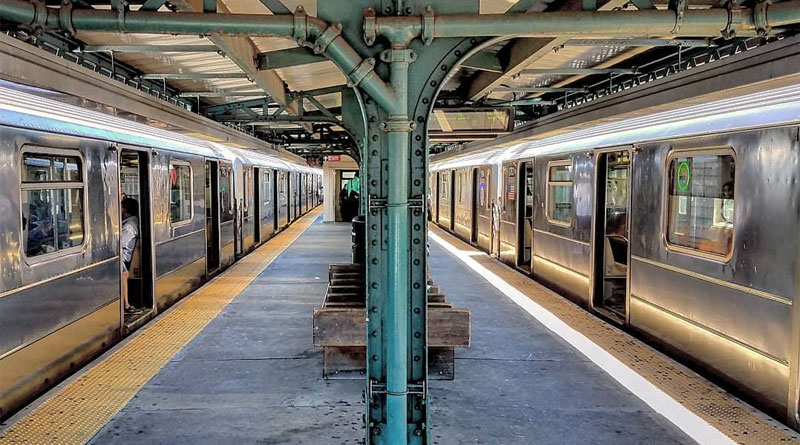 Opened in 1904, the New York City Subway is a rapid transit system that connects the boroughs of Manhattan, the Bronx, Brooklyn, and Queens. It is one of the oldest and most used public transit systems in the world. Last year, the subway system saw over 1 billion rides, delivering 5.7 million rides each weekday. The NYC Subway is owned by the City of New York, but is leased and operated by the New York City Transit Authority, a subsidiary of the Metropolitan Transportation Authority (MTA).

The NYC Subway is home to 472 stations, 470 of which are served 24 hours a day, 7 days a week. From street level, these stations can be accessed via staircase depending on whether the station is underground or elevated. Waiting platforms are found at every subway station, and can serve more than one subway line. Because there can be multiple platforms, it is important for passengers to check the overhead signs before choosing which platform to go on. The subway system has 25 train services, or “routes”, that connect all of the stations. These routes can be either local or express and are denoted by a letter or a number. The “line” is the physical track or tracks that a route uses from one station to another, and are typically named.

Paying for the Subway

To enter the subway, riders must pay a single fare and can transfer freely at any station. Unlike other subway systems around the world, the New York Subway system is one flat fare to go anywhere on the subway system, other systems charge more if you go between zones.. No extra cost is required when riders exit through the station’s turnstiles. Nearly all rides are paid using a Metro Card, which is a reusable pay-per-ride car. Metro cards can be purchased as a single ride card, a prefilled card, or an unlimited ride card in 7 or 30 day increments. A single ride fare is $3, but the fare can be lowered using unlimited ride cards.

The first idea of an underground transit system in New York City was conceived in 1869, but was never approved for construction by the city until 1894. Six years later, construction would begin in and the first underground subway lines would open in 1904, operated by two privately owned systems. In 1934 NYC would create and operate its own subway system, and would eventually purchase the other two privately owned subway systems. Since then, several government funded organizations were created to operate the subway system, and is today run by the MTA.

January 8, 2019 multisiteeditor Comments Off on Shopping in NYC: Where Is The Best Shopping?
plan your visit

March 5, 2021 multisiteadmin Comments Off on NYC & Company Management Team: Past and Now
conferences

July 27, 2018 multisiteeditor Comments Off on Other Convention Facilities in NYC
plan your visit

January 18, 2019 multisiteeditor Comments Off on Discount Hotels in the USA and International
travel

January 23, 2019 multisiteeditor Comments Off on Best Bargain Restaurants in New York City
things to do