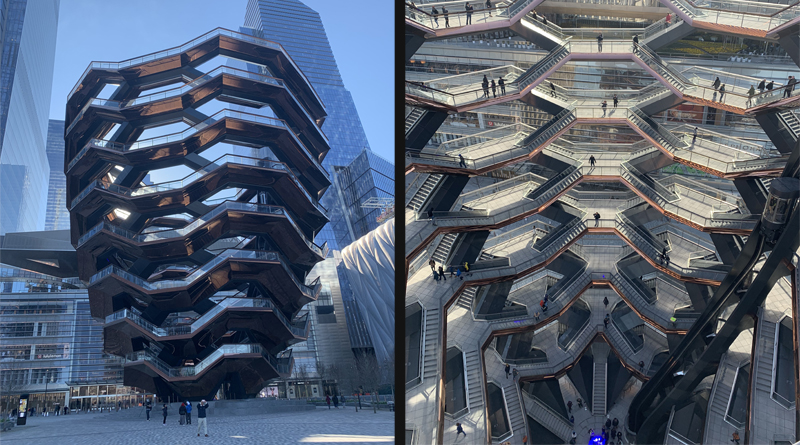 The Vessel has landed at Hudson Yards in New York City, and if the 16-story structure, that is made up of 154 connected staircases, appears out-of-this world, then the remainder of the Hudson Yards may just be a new cultural and shopping Nirvana for the masses.

Designed by Thomas Heatherwick, The Vessel takes a shape similar to that of a honeycomb and has been locally coined as the “City Beehive”, but the bees would have to very large. Construction for the Vessel began in 2017 and it was officially by the opened by the Mayor in March 2019. The structure features 154 flights of stairs, 2500 steps, and is over 1 mile long in total length, if the stairs were laid end to end. To put than in comparison terms, the vessel would stretch the entire width of the George Washington Bridge or 30 street blocks. The base of the structure is 50 feet in width and gradually widens to 150 feet at its apex. Visitors are allowed to walk up the structure, with a maximum of 700 people at any one time. The attraction is free of charge for visitors and has quickly moved to be one of the most popular NYC attractions. Inside the structure there is one elevator, which strictly for visitors with disabilities, all others must walk up the structure under their own steam.

The Vessel is one of many buildings and structures that have recently opened as part of the redevelopment project for Hudson Yards. Stephen Ross, who oversaw the development of Hudson Yards, wanted to build something “transformational”. Ross was drawn to Heatherwick’s design that featured interlocking staircases. Following its open, the Vessel was met with mixed reception. Some viewed the structure as a great addition to the landscape of NYC, while others feel that despite its scale in size lacks “real” space.

January 24, 2019 multisiteeditor Comments Off on Hotels on the NYC Thanksgiving Day Parade Route
food and dining

January 31, 2019 multisiteeditor Comments Off on Romantic Restaurants In New York City
things to do

July 23, 2018 multisiteeditor Comments Off on Past Conventions In NYC
travel