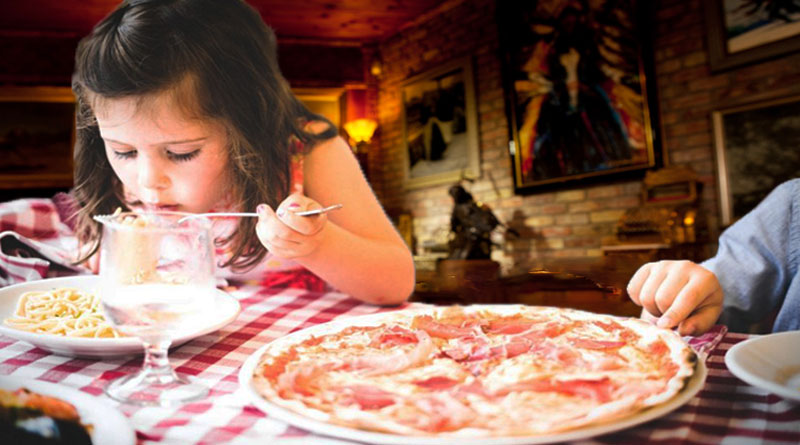 Feeding children in NYC can often be a difficulty faced by many a caring parent. The spoiled brats of today are so picky and full of opinion that feeding them has become a chore instead of an enjoyable experience. If one child wants sushi and another wants steak, then there is trouble. If the the third child wants to eat vegan, then the parent might as well give up on food altogether. Short of just going to McDonald’s and forcing burgers down the throats of your little monsters, we have compiled a list of kid friendly restaurants in New York City that they may tolerate. No doubt, your little brats will still have something to complain about with idiot responses like “the bread is too fresh” or “is the chicken free range?”, but if you just care to ignore their complaints, you are sure to have a good time. Now what is the hotline number for the adoption agency?

You’ve been up since 5 am, and the kids haven’t stopped asking you when they’re gonna get to New York City all morning. They’re dressed, coiffed and packed up for your afternoon trip to the theater but they still need to be fed and yes, you may even want to knock back something other than a baggie full of dry cheerios yourself. Sitting down at a restaurant or diner could take time you don’t have and if they eat at McDonald’s one more time this week, Jared from the Subway commercials may show up at your house pointing his index finger at you and holding up his fat jeans. Stop panicking. We’ve found you the perfect spot. You can sit. They can color. They can have real grilled cheese and place to relax that doesn’t require a reservation and you can indulge in a make your own grilled cheese with Port Salut, Gruyere and veggies on Amy’s fresh bread. Serve it up with a cup of tomato soup and a protein blast shake and you’ll have a hot meal with an energy surge to keep you going and going. Our ultimate favorite was the Chicken melt which consisted of fresh chicken breast, onions and some spicy avocado mash on olive bread, coated in melted Gouda cheese. At $7.50, it’s the most expensive thing on the menu. Yes. Seven dollars and fifty cents. Now just grab the kids, find your tickets and get on your way.

Playground for the kids complete with “ride to Mars”, plus decent and even good enough for the little Martian’s parents. Recommended dishes: Cosmic Combos (sandwiches) and Flying Saucers (pizzas) may be your best bet. Nothing too fancy here, but the location and entertainment is out of this world. Price Range: Lunch: appetizers ($6-$10), entrees ($12-$23)

Kids love sugar, it doesn’t matter what form it comes in, they will eat it until their teeth fall out and their pediatric diabetes kicks in. The Sugar Factory has settled into its home in the meatpacking district and it is churning out its sugary product faster than Willy Wonka’s factory ever could. Gelato, donuts, fondues, cheeses, crepes Suzette and even a neon fish bowl full of its specialty dry ice drink and a host of other dishes all perfectly tailored for little kids. The only thing missing is the prison wagon from Chitty Chitty Bang Bang, for when your kids start kicking and screaming from their sugar high. You could temporarily pacify them with some more sugary Couture Pops (that have become a NYC phenomenon) or some in-house home made confections and shakes, but by then you will need to deliver the kids-from-hell to Grandma’s house, where the older generation will fail miserably in controlling your little monsters, but you will be well into your bout of day-drinking with your second bottle of Chablis by 6pm.

July 23, 2018 multisiteeditor Comments Off on Plan Your Visit
travel

January 22, 2019 multisiteeditor Comments Off on Theft From Cars in NYC Parking Garages
plan your visit

January 30, 2019 multisiteeditor Comments Off on Top Hotel Bars In New York City
things to do