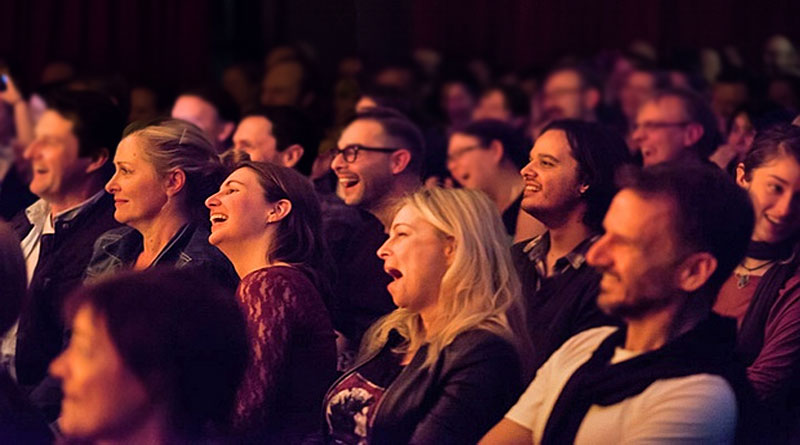 New York comedy clubs have many different prices, locations, acts, comedians, cover charges, drink prices and age requirements. There are however only two basic styles of New York comedy clubs – smaller boutique clubs and the mega-club. The smaller clubs tend to provide a more personal, tightly packed venue where the show is the focus and booked “A-list celebrity” headliners are rare. The mega-clubs are on the other side of the spectrum – are where you can have cocktails in the lobby bar, dinner in the dining room, post-show cocktails in the lounge (not just an ante room), and the headliner will always be an A list celebrity. The mega comedy clubs derived from the understanding that New York comedy clubs must “grow” in order to meet the new customers needs and so they have evolved into more of an “Entertainment Club”, where you can spend the whole night instead of just a 2 hour stint for the comedy show. Obviously there are many comedy clubs in between the two main types, but they borrow many traits from their counterparts at the edges of the spectrum.

The New York comedy clubs are up front about the price of admission, but one of the biggest complaints about New York comedy clubs are the hidden charges, usually found in the cost of the drinks and the drink minimums that have to be purchased.
Only food and drinks purchased in the comedy theatre count towards the minimums. Anything purchased in the outside bar will not be included. Some clubs are changing their revenue approach by either not requiring a drink minimum, making it a food OR drink minimum, or by allowing soft drinks to satisfy the minimum. Sodas are usually around $4, so a 2 drink minimum can be quite low.

Most New York comedy clubs today feature a mix of up-and-coming talent along with well known comedians from Television and Film. Some clubs prefer younger, edgier comedians while others stick to the old formula of well known celebrity headliners. Another trend we’ve found at New York comedy clubs are comedy theme nights. We’ve seen everything from audience participated improv, Latin, Indian, and Urban/African Nights. Even spoofs of the best comedy shows on television, including The Daily Show and The Office, have found their way to the New York comedy stage.

“The drop-in celebrity” policy, which means that if a celebrity wants to drop into a club and perform an act or material that they are developing, they can do so on a whim. This doesn’t usually happen at headliner shows or at the mega-clubs, more so at the grass roots mid-week shows when B and C list comics are appearing. When the star drops into the comedy club, the staff move the schedule around on a moment’s notice and you may find yourself in front of an A list comedian working on some new material. The comedians that do this in New York comedy clubs have included Jerry Seinfeld, Eddie Murphy, Chris Rock, Robin Williams, Adam Sandler, Colin Quinn, Lisa Landry, Damon Wayans, and many more.

Some comedy clubs are focused on delivering top headliners from TV and movie fame and have no interest in developing their own talent. Many people feel that although it’s great to see a top headliner in one of New York’s comedy clubs, it’s often very expensive. The behemoth New York comedy club Caroline’s on Broadway for example (Located in the tourist trap of Times Square) charges $40 + a 2 drink min, which can work out to over $65 per head, excluding their pricey food. A better bet for comedy fans may well be a smaller club, where at least there is a slim chance that a celebrity may “drop in” and you don’t have to pay for it through the nose.

The Mega comedy clubs in NYC don’t do it, but all the smaller clubs have some degree of new talent nights. These comedians are very often progressive and fresh, albeit with little critical acclaim or exposure. Some of the comedy doesn’t work quite yet, but they are honing their art and ironing out their comedy chops. A few of the New York comedy clubs offer these shows, its a good way to see potential top comedians before they start making Chris Rock money

Unlike “New Talent Nights”, these comedians are eager, but very wet behind the ears. It’s usually their first or second time out on stage for some of these comedians, but that doesn’t mean you won’t have fun – oftentimes the audience can enjoy seeing the comedians squirm – karaoke has long been the staple example of this. All comedians started out as new talent once, so it’s something pretty special to be able to say “I was there the first night Chris Rock appeared complete with his afro at Comic Strip Live”. New York comedy clubs won’t let you go unfulfilled though on a new talent night – they usually drop in an experienced host and one or two pro comedians to close out the show. Very few New York comedy clubs offer this anymore.

New York comedy clubs offer a bewildering array of age requirements that range from 21 and above to as young as 12 year olds accompanied by an adult. Obviously all the comedy clubs ask for ID for alcohol to be served, but this lower age requirements encourages a younger, hipper crowd as the comedy entertainment is often more fresh and progressive. Many high school graduation, post-prom and bachelorette parties go to these comedy clubs to celebrate.

8 yrs old accompanied by an adult, 21 and above alone

February 1, 2018 multisiteeditor Comments Off on Best NYC Wine Bars
things to do

February 7, 2019 multisiteeditor Comments Off on Guide to Getting Around New York City
plan your visit

June 24, 2018 multisiteeditor Comments Off on How to Avoid Bumper and Car Damage When Parking in New York City Parking Garages
plan your visit things to do

January 22, 2019 multisiteeditor Comments Off on Theft From Cars in NYC Parking Garages
conferences