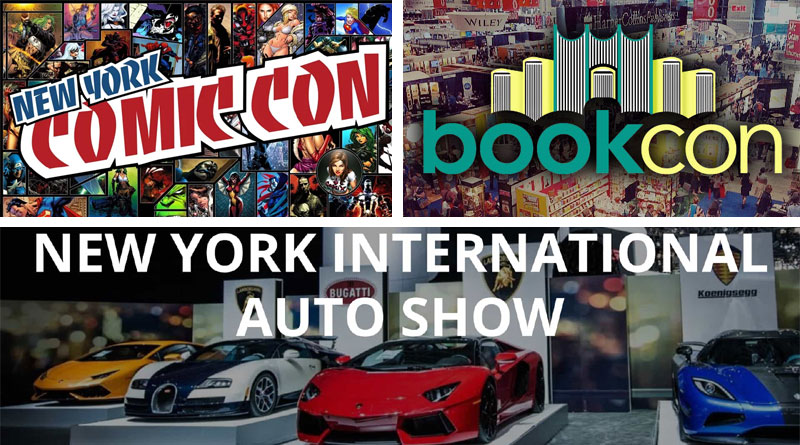 Each year, New York hosts thousands of conferences and conventions covering a wide array of interests. The goal of every convention is to attract visitors to showcase the future of a particular field of interest or industry. These three conventions, however, are the best NYC has to offer and attract thousands of guests each year.

The New York International Auto Show is by far the most popular of all conventions held in NYC. Each year, car companies from all over the world come to the Javits Center to display their latest designs and cutting edge innovations. In its history, thousands of cars have debuted and over a million guests have attended. The event lasts ten days and is thought to contribute hundreds of millions of dollars to the economy.

New York Comic Con dedicates its focus to comics, video games, toys, television, and movies. This event is held annually and also takes place in the Javits Center. Comic Con is so popular because it give comic book writers and celebrities a platform to interact with their fans. Each year the convention invites guest speakers such as Stan Lee, Kevin Smith, and Patrick Stewart. First held in 2006, the four day convention has seen tremendous growth, with over 180,000 guests attending in 2016.

BookCon takes the name format of Comic Con and is similar to other fan conventions but also combines pop culture and the book industry. Its inagural year was in 2014 and though it does not reach the same attendance as ComicCon, it is rapidly growing in popularity. Authors, writers, and even bloggers use this event to give insight about their work to guests. Notable guests include B.J. Novak, John Grisham, James Patterson, and Jeffrey Tambor. The event is not just for adults either, as several activities are organized for children. Due to its rising popularity, the two day event is held in the Javits Center.

entertainment things to do

September 5, 2019 multisiteeditor Comments Off on “American Dream” Brings Shopping and Entertainment to NYC Area
things to do

January 18, 2019 multisiteeditor Comments Off on Things To Do In New York City – For Under $10
conferences

January 17, 2019 multisiteeditor Comments Off on Lower Downtown Hotels in New York City
plan your visit things to do

January 24, 2019 multisiteeditor Comments Off on A Guide to Tipping in New York City
food and dining