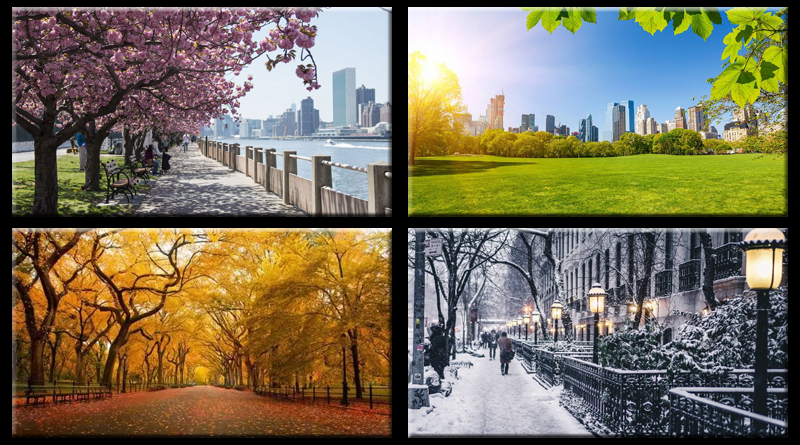 Our guide to the temperature, changing seasons, and tourism in New York City and how to plan accordingly.

When planning a visit to New York City, it’s important to consider what the weather will be like, to not only prepare by packing the right clothes, but also to consider aspects like how flooded the city will be with tourists, or what activities will have availability, like Broadway shows. When Broadway attendance and the hotel occupancy rate is down, it is more likely there will be discounts and special deals available to take advantage of. Visiting New York City at a particular time of year can make all the difference in your experience. The following table and graph contains tourism data and the graph has been normalized to show the difference in data more clearly.

When deciding the ideal time of the year to come to New York City, it’s important to find a balance that works for you based on the weather conditions, how full the hotel occupancy will be, and how many millions of tourists will be traveling in along with you. Deciding on when to come depends greatly on what you plan to do while you are here. For instance, if you want to come to New York City to watch a parade or partake in an outdoor event, consider what the average temperature, humidity, rainfall, and snowfall will be during the month it takes place and come according to your preference. There are plenty of parades throughout the year to choose from, so there’s no need to worry. If you’re coming in for an indoor event like a Broadway show, seeing one in winter to stay out of the cold is logical, but also consider July or September when Broadway attendance is lowest. To possibly find a deal on a hotel room, consider visiting New York City in January after the insanity of holiday tourism has died down and the hotel occupancy rate is lowest. Factoring all of these items together is necessary in order to suit your needs, to know when to come to New York City, and to have a guaranteed best experience possible.

New York City tends to start warming up in March, but like Fall, temperatures can range greatly and the weather can be unpredictable. The temperature in March ranges from 30° to 50°, April temperatures range from 40° to 60°, and May ranges in the 50° to 70°. Spring and fall temperatures are mild and pleasant, whereas the winters can be harsh and summers humid. Restaurants will start seating outside and more vendors with stands will start popping up. You might want to bring a light jacket, sweater, or even an umbrella and raincoat if you choose to visit New York City in the spring.

New York City summers are notoriously hot and humid with little breeze able to pass through due to the tall buildings and narrow streets. Temperatures can often reach into the 90s, sometimes resulting in thunderstorms. Come prepared with light clothing, sunscreen and a water bottle to carry, although evenings can sometimes become cool. New Yorkers tend to escape New York City on the weekends, heading east to the Hamptons or vacationing, allowing tourists to flood the city and take advantage of summer events, despite the heat. Check out our Tourist Season Guide for more information on events by season

Fall is known to be a blip in the radar in New York City’s transition from summer to winter, lasting a short time before getting into jacket weather. Fall days are commonly mild, sunny, and breezy, and a perfect time to see the changing color of leaves in Central Park. The weather can be unpredictable at this time of year, with the temperature staying in the 50s and 60s, so pack a variety of clothes and wear layers when going out for the day in New York City.

Winters in New York City from December to February are generally cold and snowy, with temperatures ranging from the 10s to 30s at the peak of winter. Winter rain is common too, creating slush and ice that can cause slips and falls. However, New York City winters are generally mild compared to most of the Northeast because of its location on the coast. Tourists flood New York City in the winter for Christmas shopping and New Year’s Eve festivities. Once the Christmas tourism phase passes, the months of January and February are slower, and therefore a great time to purchase Broadway show tickets or find some bargain hotel rooms. But the temperatures are the coldest and the sidewalks are slushy, so come prepared with heavy jackets, gloves, hats, and boots.

July 23, 2018 multisiteeditor Comments Off on Past Conventions In NYC
plan your visit

March 5, 2021 multisiteadmin Comments Off on NYC and Company Lawsuit Made Against NYCVB at WIPO
entertainment