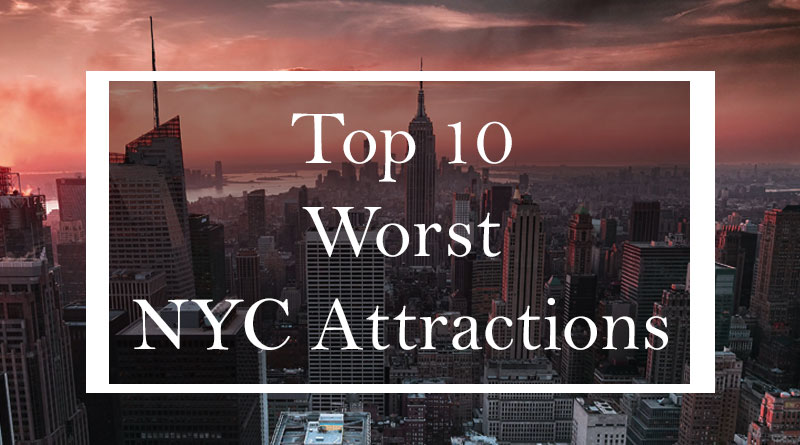 Everyone likes to talk about the best attractions in NYC, but what are the worst ones? We are listing the top ten worst attractions in NYC. These range from the tired, old, boring, stuffy and overrated experiences in NYC that visitors and locals should avoid. This does not mean that our editors do not love NYC, as we also list the Top Ten Attractions here.

What are the Worst Attractions in New York City that Tourists Should Avoid?

The Circle Line Ferry is one of the “go-to” tourist attractions in New York City, however it is quite a bit overrated because the boats are dated, a bit run down and sometimes uncomfortable. The full boat tour lasts about three and a half hours and is led by professional tour guides who are not that enthusiastic because they have probably done the same tour hundreds, if not thousands, of times before. The jokes on the tour are a bit unimpressive and cannot even get the corniest, punny dads to laugh out loud. Some views of the city from the boat are nice, but people can get better views just by standing on the river bank in New Jersey or while driving over the George Washington bridge into the city. The Circle Line Ferry Tour is also pretty expensive, with tickets at round $40 – $45 per person for the short, one hour tour and $55 – $60 for the longer tour.

Anything in Brooklyn, Queens or Staten Island

New York is known for having five separate boroughs, but none of them can compare to the city in Manhattan. Anything that is in Brooklyn, Queens or Staten Island is likely to be overrated. These boroughs are mostly just peoples homes and nothing special. The only reason that there is any excitement or news about these places is because they are very close to New York City. Many New Yorkers will talk badly about New Jersey and say that it is “the armpit of NY” but there is reason to believe that Brooklyn, Queens and Staten Island are much worse off then New York’s neighbor, New Jersey.

New York City yellow taxi cabs have been a novelty to tourists since they started running in the early 1900’s. Featured in so many popular movies and TV shows, the Yellow NYC cab has become eponymous with NYC and remains a popular tourist attraction. Other cities around the world have tried to create similar systems, but have not been able to create the same kind of tradition that NYC has achieved with its yellow cab. The yellow taxi has been iconic in so many movie scenes, TV shows and even live theatre, however the cab experience is not what it is cracked up to be. The cabs are often not very clean, the ride can be unpleasant and the drivers can be particularly rude. The drivers are also typically heated and often talking on their cell phones, at full volume, to close family members in unrecognizable languages while they are driving. Often the yellow cab drivers take indirect routes on purpose to make the rides take longer than necessary and raise the price of the already expensive taxi fare. This NYC tourist trap is now one to be avoided.

The star bakery store of the hit TLC show Cake Boss is nothing more than a front for television. The baked goods are often subpar and uninspired. The entire production at the bakery is just to create an artificial demand that has nothing to do with how good the products actually taste. The extensive pink striped fluffy to-go boxes should say it all, the bakery cares more about presentation than they do about the quality. While the line to get into the store does typically wrap around the corner, those customers are usually first time NYC visitors who have seen the show at home. Very few people are returning customers and no one has ever said that they cannot  get enough of Carlo’s Bakery goods once they have tried them just  once in person.

The Dominique Ansel Bakery and The Ridiculous Cronut

Getting in a five hour line to buy the Cronut is just about the stupidest thing you could ever do with your time in NYC. Not only is the Cronut massively overpriced, but many people think when it comes to its taste, it fails miserably. Reviewers commented that the Cronut is leke eating “cardboard that was mixed with Spackle and then baked at 500 degrees until it is stale and hard” There are so many better things to do with your time in NYC, but visiting the dentist should not be one of them. We recommend resisting the temptation to visit the Cronut  tourist trap and just pick up a tray of some baked goods from ‘Baked By Melissa’, which is by far a better choice in price, availability and actual taste. If you love instagram and hype, then you should happily get on the line at the Cronut bakery with all the other schmucks.

Popularized in movies and folklore the Coney Island Amusement Park is in reality a really old, run-down fairground that has rested upon its esteemed history to become a NYC tourist trap. The park is decades old, but surprisingly lacks the old-timey characteristics and dated charm that most people would expect to see when they visit. The famous wooden Cyclone roller coaster was impressive back in the day, when it first opened in 1927, but today it feels somewhat clunky and a bit boring when compared to other modern coasters. The only scary aspect of the ride is not its fast speed or steep down turns, but the feeling like the old wooden tracks and supports will actually collapse at any point during the ride. The one upside to Coney Island is that they have a Nathan’s Hot Dog Eating Contest once a year on 4th of July. This event has become an American staple and Nathan’s always puts on a great show. Even though some people can eat more than 75 of their hotdogs in 10 minutes in the competition, most people could probably make a better tasting hot dog on their own home BBQ grills, but that is beside the point.

Naked Cowboy and Other Characters in Times square

Since Times Square became closed to traffic, there has been an increase in the number of characters that will take photos with tourists for money. The original Naked Cowboy is the one act that predates all others and he is often played by other people who are contracted under license to the original. Not only did he win a mult-million dollar lawsuit against an advertising agency that used his image without permission, but the Naked Cowboy can now retire to his very own private island in the Bahamas, just on the lawsuit winnings. Other characters in Times Square do not have the kind of cachet that the Naked Cowboy has acquired over the years,and there are no background checks on who these people are inside the costumes. The kinds of characters that can be seen in Times Square can include; Elmo, Cookie Monster, Mickey Mouse, Minnie Mouse and other topless / naked people to take pictures with.

In classic Disney movies, Horse and Carriage rides are the most romantic thing you can ever do on a date. It seems magical in theory, but in reality it is not so much fun. Throughout a carriage ride in central park, guests are hit with the oft-foul stench of a real live horse that eats and defecates profusely  during the ride. Additionally, the rides are quite short, even though they are very expensive. The seating area often goes uncleaned and the blankets are reused from customer to customer, and begin to stink. The horses are obviously mistreated, and this can weigh on customers’ minds heavily during the rather tortured experience The Mayor keeps threatening to end this industry, but it still exists today.

Lady Liberty was given to the US by the french following the democrat side’s victory in the US civil war. The statue was dedicated in 1886 as a sign of peace, freedom and liberty for the US people. Back when it first opened, tourists were allowed to climb anywhere inside of the statue. Visitors were granted access to walk through her torso and even see the views from her crown and even from her extended hand, nearly 300 feet in the air. Then in 1984 the inside of the statue was closed due to safety concerns and interior renovations. Since then, visitors have not been allowed inside the statue. The only tickets that are being sold to the statue are for people to go and walk around the base of it on liberty island which only has a small gift shop. The best way to view the Statue of Liberty is to hop on the free Staten Island Ferry and see the statue as the ferry passes by her.

February 5, 2019 multisiteeditor Comments Off on Free Internet and WiFi Access in NYC
travel

July 23, 2018 multisiteeditor Comments Off on Plan Your Visit
things to do

February 6, 2019 multisiteeditor Comments Off on Top Concert Venues in New York City
things to do

January 16, 2019 multisiteeditor Comments Off on Are the Best Spa Treatments Actually Outside of New York City?
things to do

January 18, 2019 multisiteeditor Comments Off on Things To Do In New York City For Under $30
things to do

January 16, 2019 multisiteeditor Comments Off on Best Places In NYC To Get Married
travel

February 7, 2019 multisiteeditor Comments Off on Guide to Getting Around New York City
food and dining