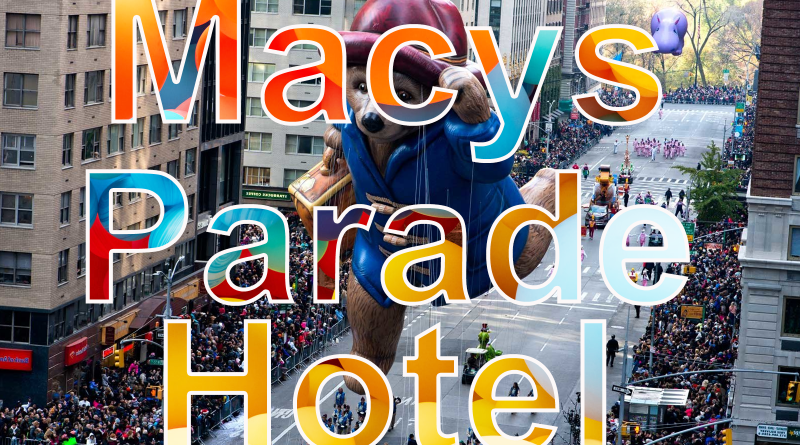 The Macy’s Thanksgiving Day Parade draws millions of spectators to New York City to watch enormous helium-filled balloons, floats, marchers, and Broadway performers go by. The two-and-a-half mile parade route changed in 2009, from it is historic parade path down Broadway to a new route. This new route will provide the parade with the extra space that is needed for the marchers and parade watchers. In the past the parade never had any turns but now 4, 90 degree turns have been introduced, which may pose some problems with wind for the helium filled balloons.

Best Ways To See The Parade – Rent A Hotel Room

The entire parade lasts about three hours from 9 a.m. to 12 p.m. If you want to view the magic of the parade live but standing in a crowded parade route and enduring the chilly November temperatures isn’t your idea of a good time, a cozy alternative is viewing the Macy’s Thanksgiving Day Parade from a hotel guestroom window or hotel event space. The change in route has sent hotels on 6th and 7th Avenues scrambling to assemble packages, specials, and viewing parties in their event spaces to attract guests.

To reserve a hotel room facing the parade route, it’s important to book these tickets way in advance, even as soon as the day after Thanksgiving to get on a waiting list for the following year.

As the parade route has changed its a whole new set of hotels that will have views of the parade. Each of the hotels below have rooms that have views of the parade. Each hotel must be contacted separately to book a room with a view. There are generally a limited amount of guestrooms facing the parade route in each hotel. These guestrooms will generally include special amenities and possible access to the hotel’s function space if it happens to face the parade route, such as the Mandarin Oriental Hotel in Columbus Circle which hosts a family friendly party in its ballroom. Other hotels with guestrooms facing the parade route include the Renaissance New York Hotel Times Square, New York Marriott Marquis Hotel, Residence Inn Hotel New York, The Michelangelo Hotel, Wellington Hotel, Trump International Hotel & Tower New York, Park Central Hotel, Bryant Park Hotel, Sheraton New York Hotel & Towers, and Sheraton Manhattan Hotel at Times Square. Prices can range greatly, with the Trump International Hotel & Tower costing $2,000 a night and the Residence Inn Hotel and Park Central Hotel offering rooms as low as $200.

List of New York Hotels with a View of the Parade

This popular hotel for parade watchers was unaffected by the 2009 parade route change as they have three sides of glass and the parade moved to the other side of the building. The waiting list for parade-viewing guest rooms can be long, but the view is worth it. The best views are from the 5th to 10th floors – any higher and you would be looking down on the balloons. There are 155 guest rooms in total that overlook 7th Avenue, 60 of them have the premium parade views and are the most popular.

Guest rooms at this hotel start on the 10th floor so they aren’t the best for parade viewing. But this hotel does offer a package for guests to be escorted from the hotel to the Minskoff Theater at 1515 Broadway where The Lion King is performed to view the parade from a space not open to the public. The space is rented out by the Marriott Marquis and is limited for 35 to 40 people. Call early to get on a waiting list at this hotel.

This hotel offers ten guest rooms that look directly out as the floats pass by. Forty non-view room packages include VIP passes to viewing events in either Studio 100 Lounge(unlimited Mimosas and Bloody Mary’s)or The Bryant Park room (expanded brunch). The parade packages all come with a 3 night minimum. The 3 night package prices range from $1,500. to $2,100. Breakfast buffet is included all 3 days.

A parade route newcomer on the corner of 51st and 7th Avenue, The Michelangelo Hotel is an Italian luxury hotel with 179 rooms throughout five floors, from the third to the seventh floor of the building— definitely prime viewing of the Macy’s Thanksgiving Day Parade in New York City. Expect these rooms to fill up fast. No event spaces are available for viewing parties.

The Mandarin Oriental Hotel offers the “I Love A Parade” package, which includes a one night stay, fall-themed amenities, and complimentary access to the ballroom on the 36th floor. The parade can also be viewed from the lobby lounge. The package doesn’t guarantee guestrooms facing the parade, but it can if you pay more. There are a total of 248 guestrooms from the 37th to 54th floor of the building.

The Wellington Hotel has guestrooms facing the Macy’s Thanksgiving Day Parade route, but it’s not guaranteed a guest will get a room facing the route. However, the parade passes outside the hotel doors, so guests can easily step outside. The hotel offers a three-night package available from November 22 to 30. A king bed guestroom is $869, while a one-bedroom suite is $1,099.

Trump International Hotel & Tower in New York City is a prime location for viewing the Macy’s Thanksgiving Day Parade. The hotel has a waiting list for guestrooms facing the parade route. The best rooms for viewing are the Executive City Suites on the lower floors, which are priced from $2,000 per night with a minimum three-night stay. There is also a Parade party every year out in front of the hotel’s five-star restaurant, Jean Georges.

About 80 to 100 guestrooms have full or partial views of the Macy’s Thanksgiving Day Parade in New York City. Function spaces are available for buyouts and meeting spaces have large floor to ceiling windows that are excellent for viewing. This hotel is another newcomer who hasn’t quite figured it all out yet, so package deals are currently being developed.

Facing Bryant Park with a view of 6th Avenue in New York City, this hotel offers about 50 guestrooms that face the Macy’s Thanksgiving Day Parade route as well as several loft spaces. The hotel does not have any special promotions for guests for the parade and viewing parties won’t be held in any event spaces. Be aware that the Bryant Park Hotel is not a “kid friendly” hotel. Rumor has it that the hotel is run by Baron Bomburst.

The Sheraton Manhattan Hotel offers about 150 guestrooms with a view of the Macy’s Thanksgiving Day Parade in New York City. Guestrooms with an excellent view cost $695 a night, while guestrooms with a partial view cost $495. No viewing parties are held in onsite event spaces, which we see as a huge missed business opportunity. Please make them an offer they cannot refuse.

July 23, 2018 multisiteeditor Comments Off on Conference Facilities
things to do

July 22, 2020 multisiteadmin Comments Off on Top Ten Worst Attractions In NYC
things to do travel

July 23, 2018 multisiteeditor Comments Off on Plan Your Visit
things to do

January 30, 2019 multisiteeditor Comments Off on Things To Do In New York City
things to do

July 27, 2018 multisiteeditor Comments Off on Other Convention Facilities in NYC