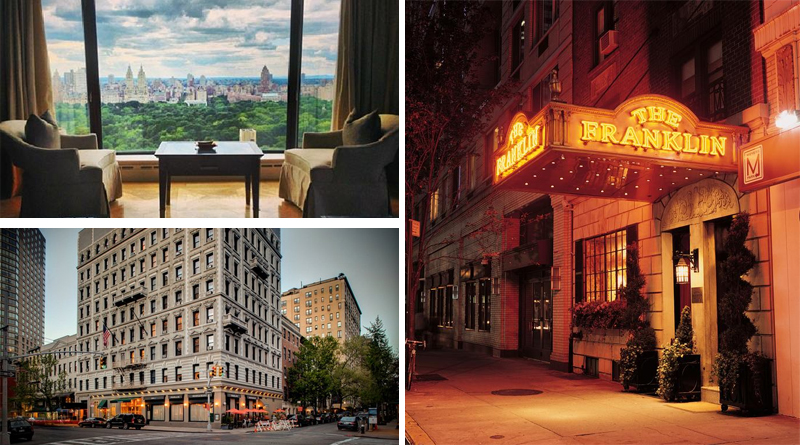 Attractions on the Upper East Side of NYC

Popular attractions in Midtown are only a couple subway stops away on the 4/5/6 subway line running down Lexington Avenue, and there are plenty of taxis and buses passing through. Residents of the Upper East Side are mainly families and young professionals, and it’s also home to many of the wealthiest New Yorkers, with some of the most expensive real estate in New York City and the country. The Upper East Side has plenty of attractions surrounding its hotels. Many Upper East Side hotels are near a stretch of museums along Fifth Avenue, famously known as Museum Mile. Museum Mile has nine museums from 82nd to 105th Streets on Fifth Avenue, including the Metropolitan Museum of Art, Solomon R. Guggenheim Museum, Whitney Museum of American Art, and Cooper-Hewitt National Design Museum.

The Upper East Side and its hotels are parallel to Central Park, where there are many New York City attractions, like the Central Park Zoo, Belvedere Castle, Wollman’s Ice Skating Rink, and monuments like The Obelisk, better known as Cleopatra’s Needle. Or visit Carl Schurz Park alongside the East River, the site of the official mayor’s residence, Gracie Mansion, at East End Avenue and East 86th Street. Some of the best Upper East Side restaurants to check out include Cafe Boulud, Serendipity 3, Daniel NYC, Aureole, and Kai. There’s also plenty of excellent shopping, especially on Madison Avenue, where there are various boutique designer shops. These include Calvin Klein, DKNY, Betsey Johnson, Bottega Veneta, Prada, Ralph Lauren, Dolce & Gabbana, and Yves Saint Laurent. Other attractions that can be found near your Upper East Side hotel are various art galleries, Comic Strip Live Comedy Club, Sotheby’s and Christie’s famed auction houses, The Asia Society, Bloomingdales, and Dylan’s Candy Bar.

Hotels on the Upper East Side of NYC

Courtyard by Marriott New York Manhattan/Upper East Side is located two blocks from the East River, and features the 92nd Street Cafe serving breakfast, lunch, and dinner, and The Market for self-service drinks and snacks. There is a 24-hour fitness center, steam room, sauna, and heated indoor pool. The 226 guestrooms feature free high-speed Internet access and laptop-compatible in-room safes. Pets are not allowed.

254 East Vacation is a unique Upper East Side boutique hotel in a cozy, private brownstone apartment building. The loft sleeps four comfortably, the one bedroom on the second floor accommodates four, the studio on the second floor has a double bed, and a suite on the fourth floor has double beds. Guestrooms are individually decorated and have kitchens, complimentary wireless Internet access, and spacious living areas.

The Franklin Hotel is a residential hotel in the Upper East Side neighborhood near the 86th Street and Lexington Avenue 4/5/6 subway station. The intimate lobby is of European style, and European Continental breakfasts are served, with 24-hour complimentary espresso, cappuccino, coffee, and tea available. There are 50 stylish guest rooms with green hues, dark wood furnishings, and wireless Internet access.

Gracie Inn is located a few short blocks from Carl Schurz Park on the Upper East Side. This bed and breakfast has 12 apartments in the form of studio rooms, one-bedroom apartments, and penthouses all for short or extended stays. Guests have a complimentary continental breakfast delivered to their room every morning. Rooms have charming country decor, Wi-Fi Internet access, kitchenettes, and flat screen TVs.

Hotel Wales is a 10-story Victorian-style hotel on the Upper East Side located one block from Central Park and Fifth Avenue. Onsite is an American cuisine restaurant named Sarabeth’s, a rooftop garden terrace with city views, a business center, and small fitness center. The 87 guest rooms are equipped with wireless Internet access, MP3 adaptors, and DVD players.

Oxbridge Carnegie Hill Apartments is a five-story building with third- and fourth-floor apartments located a block from Central Park and Museum Mile on the Upper East Side. These apartments feature fully equipped kitchenettes with microwave ovens, coffee makers and cookware/dishware, along with sofa beds, cable television, CD players and complimentary high-speed Internet access. Pets are not allowed.

January 30, 2019 multisiteeditor Comments Off on Things To Do In New York City
travel

February 2, 2018 multisiteeditor Comments Off on Sports Bars in NYC: The Best Places to Catch a Game
things to do

January 30, 2019 multisiteeditor Comments Off on New York Mets Discount Tickets and How To Get Them
plan your visit

February 5, 2019 multisiteeditor Comments Off on Free Internet and WiFi Access in NYC
things to do

January 16, 2019 multisiteeditor Comments Off on Are the Best Spa Treatments Actually Outside of New York City?
plan your visit

July 27, 2018 multisiteeditor Comments Off on Other Convention Facilities in NYC
entertainment