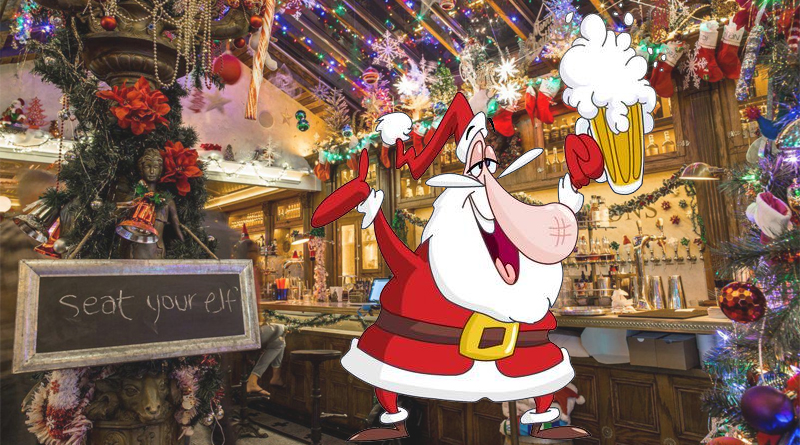 Santa Con was originally created as street theater by a group of performers in San Francisco. The purpose of the performance was to ridicule Christmas and the extravagant consumerism that it brings. Santa Con came to New York City in 1994 when a local group of singers dressed as Santa Claus and caroled up and down Fifth Avenue in Manhattan. Over the years, the tradition became what it is today, which is an all day drinking affair where patrons dress in Christmas attire and try to maneuver from one bar to the next, getting happily sloshed in between.

Each year New York City hosts the Christmas themed pub crawl on a given Saturday in early December. In 2012, an estimated 30,000 people participated in the event, but more recent numbers are now above 75,000. Revelers dress up as the jolly Saint Nick or other Christmas characters then proceed to binge drink from morning to night. As innocent as it sounds, Santa Con has stirred up a lot of controversy in recent years. The horde of drunken merrymakers often leads to fights in the NYC streets, countless incidents of public urination, and the occasional destruction of property. New York City locals have grown tired of this behavior and have put pressure on lawmakers to find a permanent solution.

Is Santa Con Good or Bad for NYC?

What is often forgotten about Santa Con is that it is in fact a charity event. All of the organizers profits are donated to New York City charities, and some bars even run a canned food drive during the event. Santa Con also gives friends a chance to meet up and enjoy a good-natured day of booze and spirits during the festive holiday season. While there are a handful of negative incidents each year, most attendees are just there to have a good time while avoiding trouble.

Since its inception in 1994, Santa Con has gradually become less about spreading holiday cheer and more about excessive binge drinking and naughty behavior. The criticism Santa Con receives is often well-warranted, as each year the lowest forms of human depravity are put on full display. Unfortunately, this sort of behavior spills out of the bars and onto the streets of NYC and effects many people who are not partaking in the event. Participants often vomit on street corners, urinate on sidewalks, and block street traffic causing a headache for New York locals and NYPD. During Santa Con, many NYC residents avoid leaving their homes unless absolutely necessary. One parent even had to explain to their distraught child on “why that was not the real Santa Claus throwing up on the sidewalk.” Perhaps when attendees put on their Christmas costume, they may feel as if they are masked from society and can act however they want to. Public transit tries to help control the mayhem by prohibiting riders from consuming alcoholic beverages while in transit, but there is no keeping the booze away from these boozers. In 2018, the NYPD cracked down on the Santarchy, as it is often known, bringing down the number of summonses from the previous year from 100 to 50.

Is Santa Con good or bad for NYC? Like many contentious issues, the truth may lie somewhere in the middle. People should be allowed to take a day, dress up in their Christmas garb, and celebrate with their friends. The issue is that far too often this celebration brings upon inappropriate behavior and negatively affects the NYC community. Ultimately, it is up to the local law makers and law enforcement to better control the situation, otherwise Santa Con will become a Christmas version of the St. Paddy’s Day debauchery and we already have one of those that is best to be avoided.

things to do travel

January 29, 2019 multisiteeditor Comments Off on Helicopter Tours in NYC
plan your visit travel

February 7, 2019 multisiteeditor Comments Off on New York City Temperature and Tourism Guide
things to do

January 18, 2019 multisiteeditor Comments Off on Things To Do In New York City For Under $30
things to do

Things To Do in New York City for Teens

February 1, 2019 multisiteeditor Comments Off on Things To Do in New York City for Teens
travel

June 24, 2018 multisiteeditor Comments Off on How to Avoid Bumper and Car Damage When Parking in New York City Parking Garages